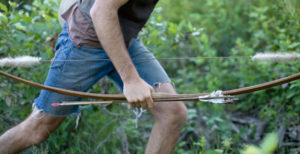 Our (Hunter-Gather) Heritage Picture a world without any obvious evidence of humans – a world without buildings, automobiles, cities, factories, gyms, schools, freeways, airports, shipyards, even a world without electronics. Picture this land before time, and in it, try to visualize the different landscapes: the jungle, with its huge trees and intense animal noises, a vast savanna, with many types of prairie grasses growing and different big game animals roaming in huge packs, and the desert, with its own unique geography and animals, specifically adapted to its seemingly inhospitable climate. These are all places that throughout time humans have called home, and it was the selective pressures in these places that shaped our genome, our heredity, what makes humans humans. The human genus (Homo) has existed for some 2.5 million years, and our specific species originated in Africa some 200,000 years ago. From there we spread out all over the globe.  Humans have lived in almost all regions of the earth with varied climates, such as the mountains of Switzerland, the plains of America, and the deserts of Australia. And through all of that and in all of those places, there was one thing that was common to all humans:  their lifestyle. Every human being on the planet, until the advent of agriculture, depended on a lifestyle of hunting and gathering for survival. Humans depended on what animals they could kill and what produce they could gather from nature for roughly the last 100,000 generations. It was only until about 500 generations ago (10,000) years ago that agriculture and the domestication of animals entered into our way of life, slowly changing everything about our lifestyle.

Before the advent of agriculture and then the subsequent industrial revolution, further mechanizing food growing and procuring, there was a direct relationship between energy expenditure and eating. Think about the land before time – there were no grocery stores, no fast food joints, no refrigerators.  Everything that kept humans alive throughout their life had to be sought out or hunted on a regular basis.  Food didn’t keep, there were no food processing plants, everything was fresh, and so it spoiled quickly and had to be gathered every few days and eaten quickly.  It was that lifestyle of hunting and gathering that shaped us; constant and daily activity was stamped into our genes, as was a dependence on fresh foods (the only kinds that were available). The needs for community and support and the values that would make us a productive part of a tribe were also stamped in. Social deviants would not have been tolerated in the small tribes that existed before agriculture. Times were so tough and without the important social skills that we still hold dear (love, trust, loyalty, bravery, intelligence, compassion, leadership, humor…) that a deviant member would have been excluded from the tribe. In that world, exclusion would have meant death, causing their genes to disappear from the earth.The time and way of life that shaped our genome was so incredibly different than it is now, it is almost as if we are on another planet.  Here is the catch: our genes are the same now as they were then.

“…today’s humans arose through a multi-million year evolutionary process. … Since the appearance of agriculture 10,000 years ago and especially since the Industrial Revolution, genetic adaptation has been unable to keep pace with cultural progress”  [Eaton, et al Review Paleolithic nutrition revisited: A twelve-year retrospective on its nature and implications. Eur J. of Clinical Nutrition 1997 51; 207-216]

Although the lifestyle change that came along with the advent of agriculture was HUGE, it did not cause humans to die before they were able to reproduce, and therefore, there has been very little change in our genes in the last 50,000-100,000 years. What does this mean for us today? It means that we are hunters and gatherers who never hunt or gather.  It means that our bodies are the same bodies that were designed, created or evolved to move (exercise) daily in a vigorous manner, eat only fresh, local, unprocessed foods that come from the earth (fruits, vegetables, nuts, seeds and meats – no grains), and live with community support in happy, positive and relatively chronic stress-devoid lives with the occasional acute stressor. It means that modern humans are using the awesome living machine that is their body incorrectly.  What happens when a machine or a tool is used incorrectly or for the wrong task? IT BREAKS DOWN MUCH FASTER.  It is the same for us!  Our genetically incongruent ways of living account for all lifestyle diseases from cancers to heart attacks, to auto immune diseases, to acne, and more.

“These conditions (heart disease, diabetes, cancer, obesity, hypertension etc.) have emerged as dominant health problems only in the past century and are virtually unknown among the few surviving hunter-gatherer populations whose way of life and eating habits most closely resemble those of pre-agricultural human beings.”[Eaton M.D. & Konner Ph.D. Paleolithic Nutrition: a consideration of its nature and current implications.N. Eng. J. Med.1985(312):282-289.]

“There is increasing evidence that the resulting mismatch fosters ‘diseases of civilization’ that together cause 75% of all deaths in Western nations, but that are rare among persons whose lifeways reflect those of our preagricultural ancestors.”[Eaton, Konner & Shostak. Stoneagers in the fast lane. Am J. of Med. 1988(84):739-49.]

If we wish to live long, happy and healthy lives, we must adopt the principles that were carved into our genes; we must live as close to a hunter-gatherer lifestyle as possible, by eating, moving and thinking in genetically congruent ways.