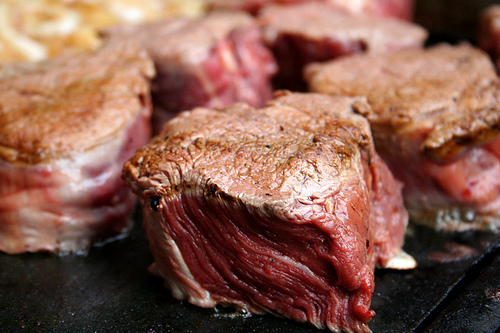 They say you are what you eat, but what about what it has been eating?  With modern and unnatural ways of farming and growing food, we do not have the luxury to only think about what we eat. We must also think about the animals that we eat and the diet and lifestyle that created them. Humans are animals, and all animals express their physiology based on how they eat, how they move and how they think. Animals that eat the natural foods that they were intended to are healthier. Animals that are deficient or toxic in the foods they eat are sicker. Animals that are raised on unnatural industrial farms and feedlots with their lack of movement, abundance of toxic fattening foods, and incredibly stressful environments create sick animals. Sick animals make for sick people when consumed, regardless of whether they taste good with BBQ sauce.

The chemical composition of a wild animal consuming a wild and natural diet, getting plenty of exercise, and being taken care of by its pack is considerably different than the chemical composition of an animal raised in inhumanely tight and stressful quarters, consuming an unnatural diet of corn and soy, getting no activity whatsoever, and being separated from its natural parents within the first week of birth. These two types of animals are so different in fact, that one actually makes you healthier when you eat it, while the other makes you sicker.

Just as humans evolved to eat a varied, natural diet of fruit, veggies, nuts, seeds and lean meats, so did cows evolve to eat a varied diet of grass.  Every species on earth was created and/or evolved to eat a species specific diet. What happens to a human being when he or she is fed corn and soy products?  Well, as you can see from this graph on Obesity in America over the last 25 years, they get fat.  It is the exact same thing with cows:  when fed an unnatural diet of corn and soy, they get FAT. And this happens at an astonishing rate, about 4 times as fast.  A cow grown in a feedlot gains 3-4 pounds each day, whereas a cow raised on a natural grass diet gains 1-2 pounds per day.

Imagine you are a cattle farmer selling your cows by the pound, with no regard for their health or the health of those who consume your cows. This is a great deal, because it means more profit for you and the appearance of cheaper meat to the consumers. However, because the government (tax dollars) subsidizes corn and soy, the consumer really is paying twice:  once with their tax dollars and once at the checkout line. So it’s actually not cheaper at all.

The huge amounts of unnatural corn and soy in their diets also wreak havoc on their immune systems, (again just like a human on an unnatural, processed food diet). This is why so many of the antibiotics used in this country are used on the industrial animal farms on their sick animals (THE ONES YOU WE FEED OUR CHILDREN!!!).  This is crazy!  Who wants to eat sick animals?  Jo Robinson explains in her book, Grass Fed Basics, that the industrial beef farmers ship their cows to industrial slaughter houses. On top of this being incredibly stressful to the animals, now the slaughter houses wash much of the meat in ammonia to kill the huge amounts of microforms that infest these sick animals. This is the meat that Americans feed their children!

Besides being fed their own natural food source, grass-fed cows are typically treated like living, breathing creatures, not just products traded for dollars. In Michael Pollan’s book, The Omnivore’s Dilemma, he describes his experience at Polyface Farm a grass-fed and natural (species-specific) diet and lifestyle farm run by Joel Salatin.  Pollan describes:

“What distinguishes Salatin’s system is that it is designed around the natural predilections of the pig rather than around the requirements of a productions system to which pigs are then conformed. Pig happiness is simply the by-product of treating a pig as a pig rather than as ‘a protein machine with flaws’…” Happy animals are healthier just like happy people are healthier people.

Below is the quick guide to the differences between healthy grass-fed cows and unhealthy feedlot meat:

Find grass-fed meat near you!