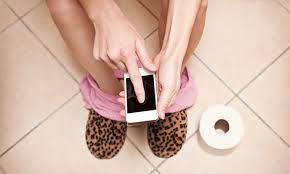 It’s happening to you.

It’s happening to your kids.

Even the person in the big truck next to you on the road – while they’re driving.

At minimum it’s a potent distraction, at maximum causing depression and leading people to self harm, even suicide.

It’s disruptive to our health, causing unnecessary stress, life-satisfaction issues (who looks at Facebook or Instagram and walks away feeling better about their life?), depression, even degeneration of brain tissue and function.

It’s called digital addiction – our reflexive attraction and obsessive attention given to the seemingly endless stream of available information/stimulus on our phones, tablets, and computers. Digital addiction has not only become a dominant presence in our lives, but it’s causing real damage to our physical and mental health.

We are all witness to this phenomenon – the married couples out to dinner or the groups of teenagers who don’t talk to one another, their heads down, absorbed in their social media feeds. The families whose young children who are ‘zombied out’ while being babysat with iPads. The people at work who can’t maintain sustained focus to be efficient or competent, let alone engage in a cogent conversation with complete sentences. The truth is, we all are falling victim to this malady of modern life.

“Unlike alcohol or opioids, phones aren’t an addictive substance so much as a species-level environmental shock. We might someday evolve the correct biological hardware to live in harmony with portable supercomputers that satisfy our every need and connect us to infinite amounts of stimulation. But for most of us, it hasn’t happened yet.”

– From Do Not Disturb: How I Ditched My Phone and Unbroke My Brain by Kevin Roose, NY Times

As a result our health is suffering, in many ways. Particularly in the Bonfire SPARK category – screen time causes brain stimulation which negatively affects our health – causing stress, life management issues from poor sleep to diminished brain power to depression.

Addiction by Design
First, all those ‘Likes’ and other notifications we see on Instagram or Facebook – our brain’s response to those stimuli – the ‘likes’ and notifications – activate primitive pleasure centers in the brain, which when stimulated, we find hard to turn away from, to close the app, to set our phones down. Those notifications that we seemingly and innocently click on over and over, are there by clever and planned design. And, unless we consciously make efforts to fight against those incessant ‘pleasure crumbs’, we fall victim to digital addiction, no matter what our age.

The problem of deliberate addiction design had even spawned legislative efforts.

“Big tech has embraced a business model of addiction. Too much of the ‘innovation’ in this space is designed not to create better products, but to capture more attention by using psychological tricks that make it difficult to look away.” – Senator Josh Hawley (R-Mo.), who introduced legislation titled The Social Media Addiction Reduction Technology (SMART) Act

The effects on our brain from excessive screen time, or what’s being described in psychiatric circles as problematic smartphone usage (PSU) are real:

‘… [young] people become “panicky” or “upset” if they are denied constant [digital] access. The youngsters also cannot control the amount of time they spend on the phone. The study warns that such addictions have “serious consequences” for mental health.’  The research, analysed 41 studies involving 42,000 young people in an investigation into “problematic smartphone usage’ (PSU). The study published in BMC Psychiatry, listed increases in the following clinical outcomes in children and young people as a direct result of PSU:

Targeting Children
As tech giants Facebook and Google face heightened scrutiny of their tactics for creating increased digital addiction, no where is it seemingly more urgent than how it’s targeted toward children (not to mention the data gathering that furthers that agenda, including children’s usage data).

‘… children who have more screen time have lower structural integrity of white matter tracts in parts of the brain that support language and other emergent literacy skills. These skills include imagery and executive function — the process involving mental control and self-regulation. These children also have lower scores on language and literacy measures.’ [article link]

A brief overview of brain anatomy and the consequences of compromised structural and functional aspects to the different areas of the brain:

Gray matter: this is where ‘processing’ happens – planning, organizing, taking action to follow through and complete tasks, as well as impulse control. Additionally, this is the are of the brain where empathy and compassion emanate from; also the ability interpret and assimilate physical stimulus with emotion. Dysfunction of this part of the brain can be associated with violent behavior, and the ability to effectively deal with frustration, disappointment and stress.

White matter: This tissue within the brain allows for ‘connection’ within the brain itself, facilitating and coordinating communication between various regions within the brain (the gray matter), thereby affecting learning and when damaged, results in cognitive impairment (for example, Alzheimer’s disease is characterized by pathological lesions on the white matter).

Parents are stuck
As a result of this perfect storm of technology and its prevalence in today’s world, parents are now struggling with the reality of a ‘new normal’ – screen time as part of daily life. Parents will admit that they observe a deterioration of their children’s mental and social health but are often reluctant to impose restrictions due to societal ‘norms’ – they don’t want to be perceived by their kids or others as ‘harsh’ or unreasonable parents to interfere with their kids’ use of digital devices, which are now such an accepted part of life. (Actually, some parents may first struggle with whether their 4th grader should have an iPhone; or without one, will they feel ‘left’ out compared to their peers).

“As a practitioner, I observe that many of the children I see suffer from sensory overload, lack of restorative sleep, and a hyperaroused nervous system, regardless of diagnosis—what I call electronic screen syndrome. These children are impulsive, moody, and can’t pay attention—much like the description in the quote above describing damage seen in scans.” – Victoria L. Dunckley, MD (Gray Matters: Too Much Screen Time Damages the Brain)

The fact that digital content is expertly and intentionally designed to trigger a stimulus – response cycle that is nearly impossible to bypass, doesn’t help matters.

“The idea that it’s O.K. to nudge kids into endless behaviors, just because you are pushing their evolutionary buttons — it’s not a fair fight, It’s little Timmy in his bedroom versus Mark Zuckerberg in his Valley.

“Children are no match for the turbocharged influence tactics, and often stay glued to the services even if doing so makes them unhappy.” [source – NY Times]

The Science
Now science is starting to weigh in on the effects of our digital lives and excessive ‘screen time’ for our children.

In both psychological and physiological scientific circles, the evidence is clear – digital screen time is not helping things.

The social costs – young people’s relationships and communication skills are falling apart as a result of our phones.

For a well-articulated description of how digital technology in general and social media in particular is affecting people, I strongly recommend you watch the following segment – it’s absolutely brilliant:

As a result of the pervasiveness of digital addiction, particularly with young people, “… too many kids don’t know how to form deep, meaningful relationships.’ ‘… and worse, they don’t have the coping mechanisms to deal with stress.”      – Simon Sinek

[By the way, this entire segment is worth watching – the video embed above starts three minutes in.]

Here you can also find some good strategies: How to Kick Your Digital Addiction and Learn to Live Again  [Yes Magazine]

About Baroness Kidron mentioned above:
in 2012 she decided to make a documentary about children and the internet. She spent months embedded with tweens and teenagers, sitting next to them as they lived their digital lives. They exchanged messages with friends, fell in love with strangers, were bullied, watched pornography and played video games. The documentary, “InRealLife” features the children describing how they felt simultaneously interested, hooked, influenced and repulsed by online services.

“I was worried about some of the feelings they were having,” Lady Kidron said.

What you can do about it:

“Mostly, I became aware of how profoundly uncomfortable I am with stillness. It’s an unnerving sensation, being alone with your thoughts in the year 2019.”

From Do Not Disturb: How I Ditched My Phone and Unbroke My Brain by Kevin Roose, NY Times

For children, there are a number of apps parents can use to monitor and/or restrict their kids’ digital obsession:

For both Android and IOS

For adults who want to self-restrict:

Babies need humans, not screens – find out why, and how, too much screen time can harm your child. [Unicef]