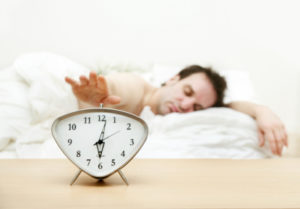 The way that your body cycles levels of activity throughout the day is called your circadian rhythm. Various brain centers have internal rhythms that affect your body, and in turn are affected by personal habits such as your sleep patterns, activity level, and light exposure. Since these lifestyle choices play such a large role in how your body functions, it is important to maximize your personal lifestyle habits to reflect how circadian rhythms are innately programmed.

Many activities inside your body vary based upon the time of day. Body temperature, wakefulness, digestion, even cell division are all affected by circadian rhythms.  Nearly all of your bone growth as a child occurs at night!

Lack of a Healthy Rhythm
It is well known that those who don’t sleep on a healthy cycle suffer from health problems due to their schedule. For example, those who work the night shift have a greater percentage of most of the major chronic diseases relative to those with a daytime work schedule.  Also, not sleeping enough is a powerful negative influence on your body.  For example, sleep deprivation is a strong promoter of obesity and weight gain.

Circadian Rhythms Also Effect Your Hormonal State
The hormone cortisol is emitted in a cycle throughout the day.  Cortisol is a hormone that your body releases primarily in times of energy usage.  In terms of your body’s circadian rhythm, cortisol reaches a peak output first thing in the morning.  On the other hand, the output of cortisol is lowest in the late evening.  The greatest output is around 5 a.m., while it is at its lowest point in a 24-hour period around midnight.  This is one reason why getting to bed before 11 p.m. helps your body sync up with your natural circadian rhythm.  And this helps to maximize repair during sleep.

What Determines When We Feel Tired and When We Go To Sleep?
There is a constant balancing act inside your body that determines your state of wakefulness.  This is a result of there being two systems in your body that control your level of activity.  One is called the “circadian arousal system” and the other is the “homeostatic sleep process.”  While the arousal system encourages alertness, the sleep process eventually prevails and results in us falling asleep.

These two systems are key parts of your body’s circadian rhythm.  Interestingly, it is the interactions between the two that result in the common feeling of sleepiness that happens in the mid-afternoon.  As the arousal system starts to fade, research has found that there is a near-universal desire to sleep in this ‘nap zone.’   So much so that NASA researchers studying the benefits of naps found that only 26 minutes of mid-day sleep improved pilots’ performances by 34%.  Check out this audio clip!

What is Happening While We Are Sleeping?
Sleep is a distinctly different state of being than wakefulness.  Instead of simply shutting down, your brain has distinct types of activity that occur during sleep, and only during sleep.  And in fact, these specific patterns of brain activity during sleep occur in cycles.

REM Sleep
The end of a cycle of sleep has what is called REM sleep, or Rapid Eye Movement Sleep. This is where dreams primarily occur and certain portions of the brain are most active.  To do this, your body is actively shut down by your brain so that your body is not involved in physical movements during all of this activity.

The amounts of REM get longer with a more full night’s sleep, another reason why it is important to get to sleep early – before 11 p.m. is best.

Non-REM Sleep
The first part of the sleep cycle has three stages.  Stage 1 begins when you first fall asleep, a light sleep.  Stage 2 is also light sleep, but the eye movements and other light twitches that may occur during Stage 1 have disappeared.  Stage 3 is deep sleep with its own unique brain activity pattern.  This is thought to be the most important type of sleep, and also the type of sleep your body will favor when you are sleep deprived.

Transitioning out of Stage 3, you pass through REM sleep before starting another cycle.  A single cycle can last from 60 to, more commonly, 90 minutes before a new sleep cycle starts.  The quality of your sleep is largely made up of how your body transitions through these cycles through the night.